The city in my eyes


The nineteen artists deposited another point of view on their city, Aspropyrgos, in the online group exhibition of visual arts entitled “The city in my eyes”, organized by Emilia Bouriti with the Artistic Platform “Syn+Ergasia”, within the framework of the “Celebration in the Community” section of the International Amoli Program. The exhibition shall be carried out in cooperation with theCultural Center of the Municipality of Aspropyrgos, sponsored by the Ministry of Culture and Sport.

The nineteen artists from the Municipality of Aspropyrgos condense through visual views their images and experiences and intelligently place their work along the city’s main street, Leoforos Dimokratias.

What stands out in this exhibition is the diversity of projects, the diversity of approaches and materials. The works are inspired by either from memories and traditional practices or from modern approaches with the intense element of experimentation. A visual panorama on the city of Aspropyrgos, which conveys the personal artistic signature as well as the love of artists for the city. Although the exhibition was organized in the pandemic, and through online meetings, the results reflect the true interest of the artists for this project.

The exhibition conveys the message that Aspropyrgos is a city with large development in economy as well as in the field of art.

The exhibition didn’t have a curation process, but it followed the model of self - organization.

Emilia Bouriti was born in 1966 in Aspropyrgos, Attica. Her studies at University of Brighton at postgraduate and undergraduate level in Performance, Visual Arts and the collaboration of Different Fields of Art towards a kind of integrated performance have formed her artistic practice and her style of teaching.

The main axes of her work are:
Site-specific installation performance / Body in dialogue with urban and industrial element /Experiential collective action in community-based communities / Performance in relation to food and agriculture / The body as an energy and ritual field / Creating integrated performance with interdisciplinary practice / Research on thematic projects and their evolution over time

Her fifteen-year teaching experience at an academic level (college and university training) performance revolves around:
Body awareness and empowerment of personal expression / Methodology and techniques of yoga and butoh as basic tools for preparation of the psychosome / The body and dialogue with architecture and the environment / Methodology of long-term performance / Specifying site specific installation performance / Interdisciplinary practice aiming at the interconnection of the arts

Since 2003 she has been a founding member of the artistic platform "Syn + ergasia", which creates works by inviting artists from different fields

The non-profit organization, under the brand name "Syn+ergasia, was founded in December 2007 by Emilia Bouriti, a visual and performance artist. It is located at the city of Aspropyrgos in Attica and has been operating as an artistic platform with collaborations from Greece and abroad..

The purpose of the company is exclusively cultural, research and educational and it aims to promote all forms of art in Greece. It is as active member of the European and international community intending to strength the links between art, society and science..

Emilia Bouriti studied at University of Brighton at postgraduate and undergraduate level in Performance, Visual Arts and collaboration of Different Fields of Art towards kind of integrated performance have formed her artistic practice and her style of teaching.

From 2000 to 2009 she taught butoh dance by the Japanese master of butoh Atshushi Takenouchi.

2005
Official Participation in the Japanese EU-Japan People to People Exchange, presentation of an artwork

2003
Presentation at the International Conference of The European League Institutes of the Arts (ELIA) of the postgraduate diploma as a Standard European Master Practice-Based, Vienna

2001-2002
Lambrakis Foundation scholarship for postgraduate studies at the University of Brighton, Great Britain

2000
Greek - English League Scholarship for the Completion of the undergraduate studies at the University of Brighton, Great Britain

2017
Aegeus ΑΜΚΕ, Sponsorship for the production of the project The Anthropometry of a post-industrial city

2017 & 2016
Municipality of Aspropyrgos, Sponsorship for the completion of the documentary "100 Years of Rural Life in Aspropyrgos "and development of the project Post-Industrial Rural Paths

2018
Berlin Soup – International Festival of the Arts, participation with the video-performance Demas, Berlin

2004
Presentation of the project Time Space Energy and lecture on interdisciplinary artistic collaboration in integrated performance at the international conference of The European League Institutes of the Arts(ELIA) Tilburg, The Netherlands

Work in the community - New forms of collectivity

2016- on going
Research and work on Aspropyrgos and Thriasio Pedio Post-industrial rural paths: collective experience in the fields

2015
Eleusi, Space Time Energy. The body in its industrial landscape Eleusina, performance and installation, International Aesthetics Festival, outdoor area of Paleo Eleourgio, Eleusina
Towards to west, performance at the start and ending of the Semi-marathon race of Eleusina, Asxylia Festival, Eleusina

2006-2007
To the real self - Hymn to Demeter, performance of the different versions of the work: Festival of the Municipality of Athens, Aisxylia Festival, The month of dance of the Greek choreographers, Art space Metalourgio, Booze Cooperativa, Katia Dandoulaki Theater

2005
To the real self - Jinen, performance and installation, in collaboration with the Japanese choreographer and butoh performer Atsushi Takenouchi, under the auspices of the Japanese Embassy, the Municipality of Athens, Art space ParkoEleftherias, Athens

From 2002 to 2010 she was a representative and official partner of the European League Institutions of the Arts (ELIA),a non-governmental organization which represents over 370 supreme art institutions from 45 countries in Europe ArtesnetandInterArtes, where he also participated in a multitude of meetings- either as a rapporteur, as an organizer or as an active member.

Announcements at international conferences of ELIA

2004
Vienna, International ELIA Congress. Presentation of Emilia’s postgraduate work as an example of a European Practical based Master

2008
Two-days of seminar and workshop about the work of The European league Institutions of the Arts (ELIA), the Bologna Declaration, self-evaluation, the developments in college and university education in Greece, Athens School of Fine Arts, Athens

2003
Meeting of the European Higher Art Schools of Theater Departments with the Greek Theatre Departments. The theme "The theater studies in higher education in national and European level ", Museum Benaki, Main Building, Athens

2010
Gothenburg, Participation in the meeting of the European Program artesnet on issues related to the evaluation of Art and the collaborations between the Arts Schools

2009
Sofia, Participation in the Teacher's Academy: workshops and presentations of new methods of teaching
Palermo, Participation in a conference on "Transition and Evolution of Schools of Fine Arts in the field of education and research

2006
Budapest, Participation in the educational workshop on self-assessment and the Bologna Convention

2004
Lucerne, Participation in the conference "Dialogue in Art in the Light of students, teachers, spectators and researchers”

2001
London, Representative of the Duncan Dance Center in Prague. Participation in the conference "Examining the Diversity of Dance education in Europe

Participation in other Conferences and Symposia - Lectures, Collaborations

2002-present
Collaboration in interdisciplinary research about ancient tragedy under the perspective of contemporary art, with Associate Professor of Philosophy, Mrs. Anna Lazou

2017
Thriasia Festival, Presentation of the documentary Post-Industrial Rural paths and lecture "Art in dialogue with one post-industrial and rural experience ", Agrokipio Theater, Aspropyrgos

2011
1st Conference of Ancient Drama, Lecture on “The Homeric Hymn to Demeter as a meeting point between the Apollonian and Dionysian of the Dionysian energy. The universal symbol of IeraOdos”, Cultural Center of the Municipality of Athens

2010
Open University of Aspropyrgos, Lecture on "The artistic perception of IeraOdos”, Aspropyrgos

2006
3rd International Sifnaiko Symposium: "Apollo and Dionysus: The Apollonian expression in the movement of the body and the landscape of Sifnos”, Apollonia, Sifnos

2017
Member of the "Artist Cooperative Athens"

2003-2005
Treasurer of the Dance and Rhythm Association

2010
Open University of Aspropyrgos, edition of the lecture, title "The Artistic Approach of Iera Odos"

2009
Research "The bidirectional relationship of body movements with sculpture, human body and space", published in the international academic academia.edu platform

2004
Publication of the postgraduate research entitled "Apollo and Dionysos: The Dancing Spirit",Archaeology and Arts, Issue 93 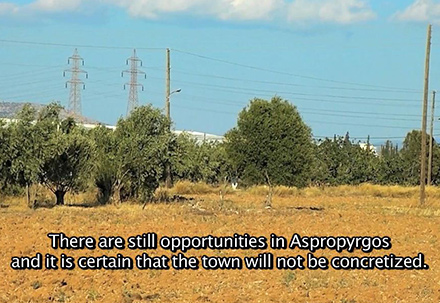 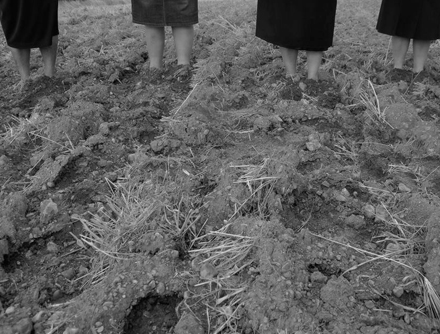 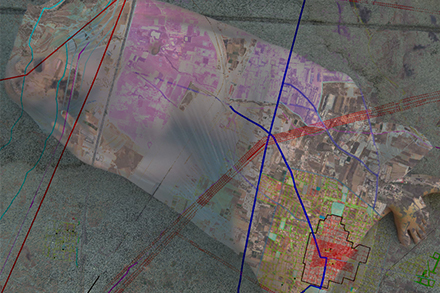 The Anthropometry of a post-industrial city 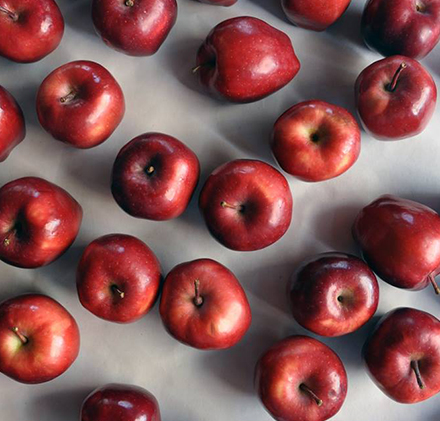 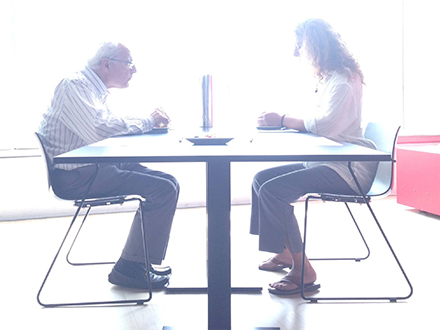 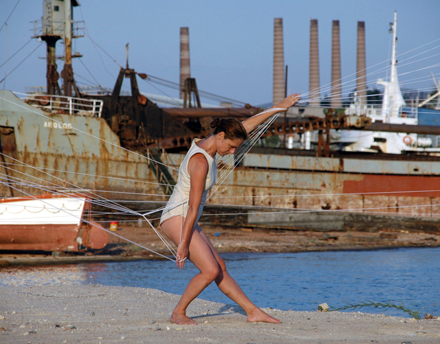 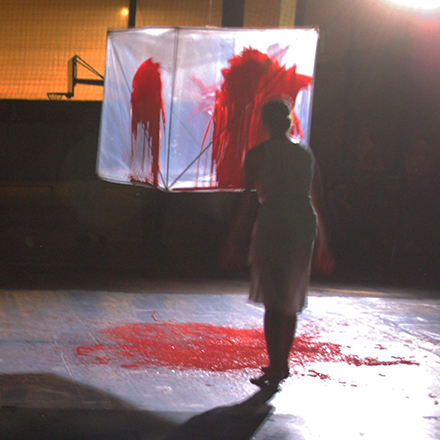 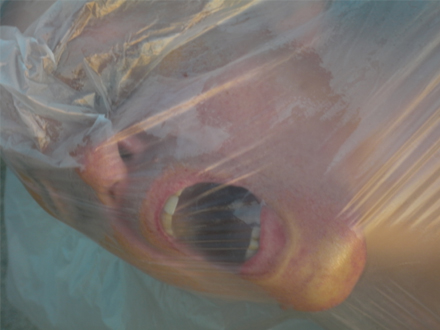 When the body meets Engraving and Sculpting 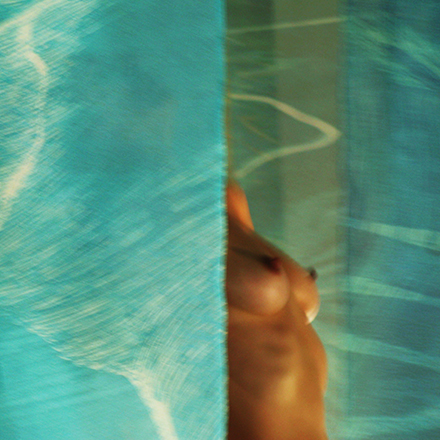 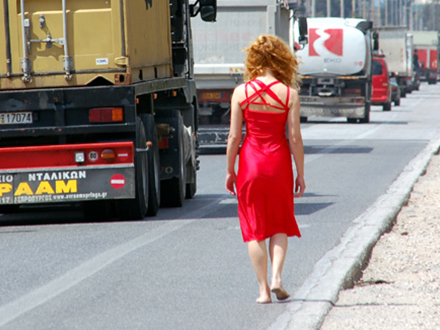 Walking westwards along the sacred way 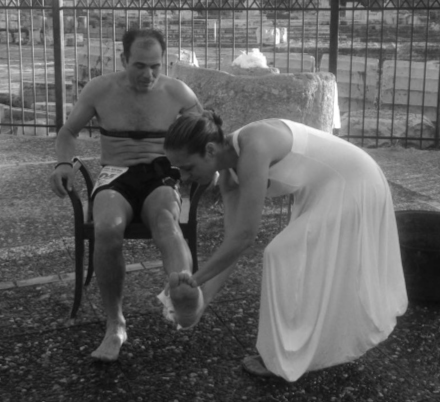 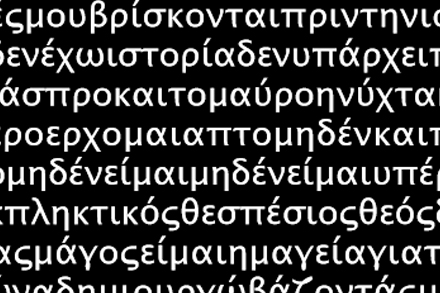 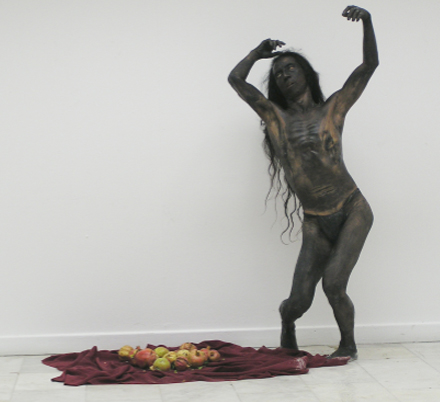 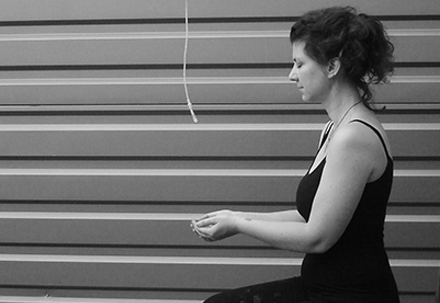 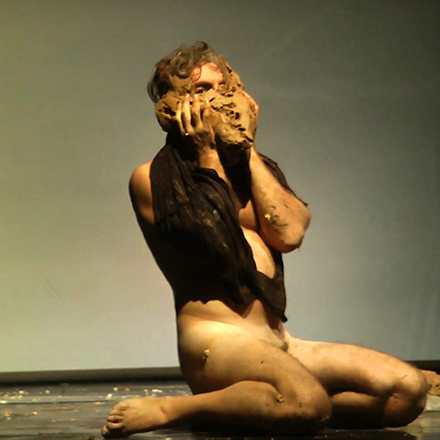 PERFORMANCE OF STUDENTS AND GRADUATES 2018 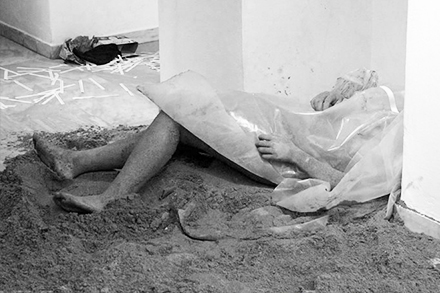 The Body in Physical and Mental Space The Little Paris of Athens 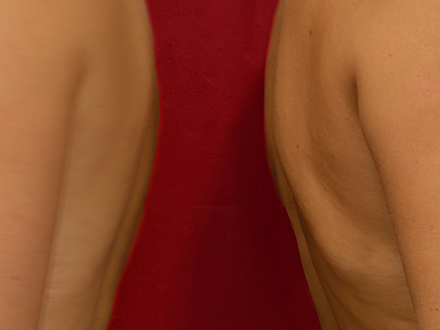 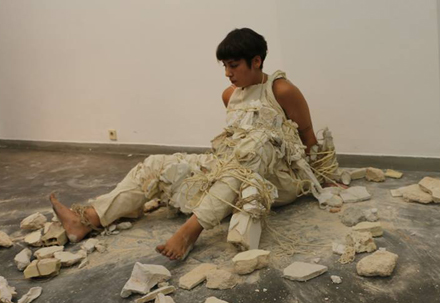 2009-2016
Teaching of the subject "Kinesiology" in context Performance in the Department of Music Science and Art, of the University of Macedonia

2010-today
Conducting a Performance Seminar at the Athens School of Fine Arts on the subject: " The plasticity of movement in space - the body as action and space in performance with the support of the A’, C’, E' Laboratories of Painting.

05-06/2008 Taught the course "Movement and Improvisation" to students first and third year of the Fontys School of Performing University and Visual Art, Fontys Dance Academy in Tilburg, The Netherlands

2004-2007
Teaching the subject "Kinesiology and Improvisation with use of audio-visualmedia" at the Higher School of Drama Art "Mary Vojiatzi Traga", supervised by the Ministry Culture

2004
Conducting a seminar on "Kinesiology - Performance" to the students of Department of Philosophy - Pedagogy - Psychology, Philosophy School, National and Kapodistrian University of Athens

Lectures open to the public at the Athens School of Fine Arts (ASFA):

"The Body as a physical ark of energy " lecture and practical workshop with the students in the Laboratory area, A’ Painting Laboratory , 18/4/2016

"The Body in relation with Action and Space in Performance", 11/02/2011, C’ Painting Laboratory ASFA